The Part of Costa Rica No One Knows Exists

ISEP student Renee spent a full year studying at Universidad Nacional in Costa Rica. Included in this adventure was an 8 day Global Engagement Project with ISEP, which didn’t end up being quite what Renee had expected. Here she tells the story of how a slightly dreaded field trip turned into one of the best weeks of her semester. 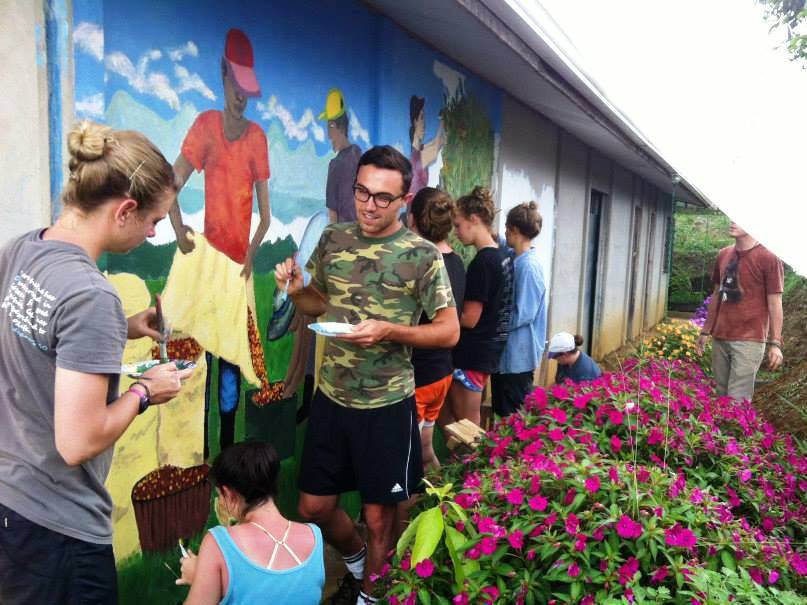 Students volunteering to paint a mural in Costa Rica.

As a part of our study abroad program, we are required to do a week-long Global Engagement Project (GEP). Like any self-respecting young person, I was instantly suspicious of any kind of obligatory field trip. Also, since it was the week after the semester, I was kind of ready to go back to the United States and see the people I love. Nevertheless, I went, and it ended up being one of the best weeks of the semester.

Altamira is a rural community in the southern part of the country. It’s actually in this huge national park called Parque La Amistad–the biggest park in Costa Rica. While there, I discovered a love for the landscape of southern Costa Rica. Additionally, life and the people in the rural area are different from what I had become accustomed to in the city. The village is in the mountains and the people work in organic farming and coffee production. 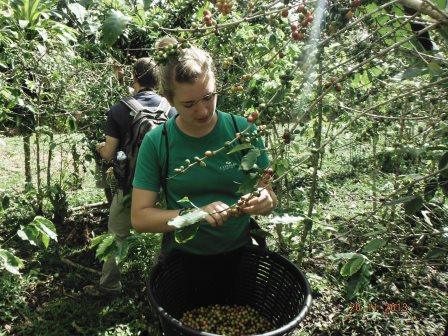 Picking coffee with the snazzy waist-basket my host dad loaned me.

Since we were there for a week, this is the place I’ve stayed in the longest in Costa Rica–other than, of course, Heredia. Therefore, we did a lot of stuff.

I expected more work than we actually did. We worked a bit every day: cutting tiles to make mosaics, weeding, planting vegetables, picking coffee beans, and a lot of painting a mural on one of the outdoor walls. The mural turned out very nice in my opinion. I had a lot of fun developing my painting style by painting the clothing and some of the horizon.

One of my favorite parts of the week was playing soccer with the kids of the community. They were a lot of fun, and since they’re kids, I could (mostly) keep up with them. We played different games as well, but it’s quite obvious that, like everywhere else in Costa Rica, soccer is the real passion.

We had a couple of cultural-sharing times as well. The tico kids had cool things to show us, such as traditional dancing. When they told us we ought to do something as well, we all looked at each other like, “Uh.” 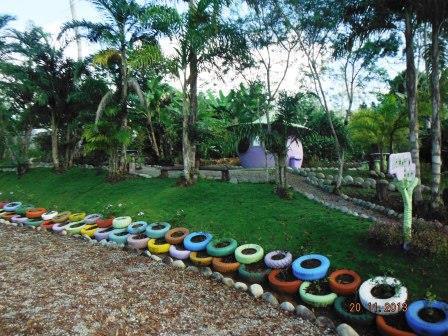 –Small digression: the other exchange students and I had discovered all sorts of cultural differences within our own group, such as differences in speech, in food, in customs and what we missed about home. We were from all sorts of places in the U.S. with diverse backgrounds. I think I did as much American cultural discovery as Tico cultural discovery. But the point is, we don’t even all have a consistent culture to show.

My cultural contribution was to teach the line dance to Copperhead Road by Steve Earle, since it’s relatively simple to learn. Apparently, this only happens in Texas, because even my fellow Southerners didn’t really know what it was. 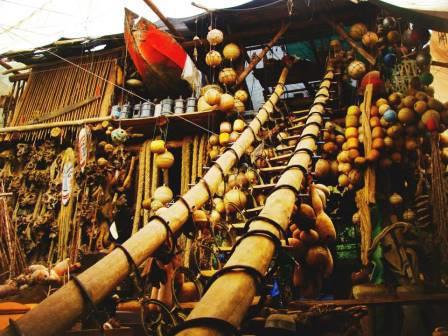 We also hiked a mountain trail, went to a (freezing cold) waterfall to swim, and went to some hot springs.

One of the most interesting things in the community is the art in some of the buildings and signs. For example, the main cafe is a concrete creation with organic shapes and mosaics of trees, birds, and flowers. This is all thanks to this guy named Pancho that lives on the top of the mountain in the most unusual living space I’ve ever seen. He does art for the community and plants seeds of plants that are becoming scarce. I wish I could have caught more of his story, but I was pretty miserable the day we met him since I was sick and half-blind (missing a contact).

How I Got There

ISEP took us in a shuttle. At the time, I had only the vaguest idea of where we were going, so we could have ended up in Colombia and I wouldn’t have known the difference. 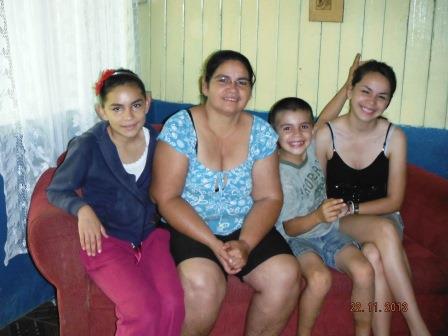 My family (minus my dad and other brother).

One of the best parts of my time in Altamira was my host family. I love my host family in Heredia, but the unknown of staying with a new host family, even if only for a week, made me nervous. I really shouldn’t have worried, though.

My host parents have eight children, although only four of them were in the house while I was there. I really connected with the two youngest, my twelve-year-old sister and eight year old brother. It was the first time I got the opportunity to have younger siblings. We taught each other card tricks and card games, and my sister tried to teach me how to dance (without much success). One time, as I was headed to the bathroom to take a shower, my brother took one look at the towel and clothes in my hands and shouted, “Me first!” as he ran into the bathroom. He closed the door behind him, and then reopened it so he could peek out to see my reaction. My host mom started to apologize, but I was laughing pretty hard. 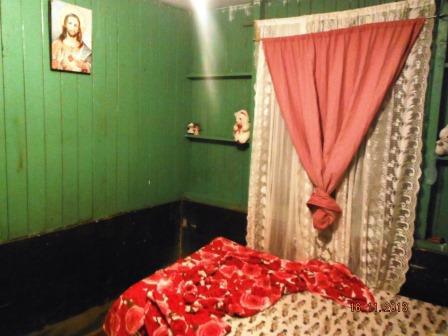 The house was up a super steep road, almost to Pancho’s house. Luckily, there was an alternative route on a windy muddy path through the forest, so every morning, I got to start my day feeling like the only person in the wilderness of the world.

I loved every bit of the house, from its isolation to the colorful walls (inside and out) and the livestock in the back. At night, the family would cram themselves onto the couch and chairs in the living room to watch soccer or Animal Planet on an old TV. As a part of the multi-TV, unlimited programs generation, I have never experienced something as simple as a whole family routinely watching family friendly TV together. I liked it. A lot.

I met my host dad when he was feeding the pigs. For a living, he works picking coffee beans, and other types of work in the community. He is one of the most decent men I have ever met, and his kindness with me and obvious love for his family reminded me of my own father. 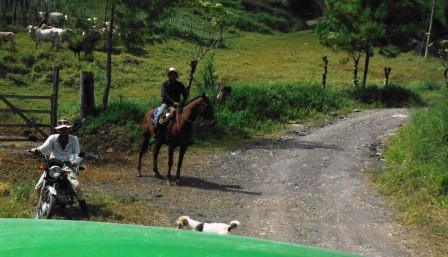 I left a bit of my heart in Altamira last semester. I had to make a decision this semester between going again or experiencing the processions and activities of Holy Week in a Latin American country. After a lot of agonizing, I finally decided to do the new experience since my time is so limited here.

If you’re interested in volunteering with the community, the organization is called Asoprola (Organización de Productores la Amistad), and they work to improve the community through organic farming and eco-tourism. Both national and international volunteers come through for a week, two weeks, a month–I even met a girl from Germany that is there for a year. You can get more information here.

Want to learn more about Renee’s life in Costa Rica with ISEP? Read more of Renee’s stories – like, “What it’s like to live with a host family,” or, “Things you should know before going to Costa Rica” – on Renee’s blog, The Way Less Traveled By.

If you are interested in a study abroad program like Renee’s, you can learn more about studying at Universidad Nacional by watching ISEP Live on March 18, 2015 at 4 PM EST, featuring volunteer and service learning opportunities with ISEP Study Abroad. If you can’t make it, don’t worry – the video will be available for live streaming on YouTube after the show.

Blog How Studying and Volunteering in Ghana Changed Me Studying abroad often means learning to expect the unexpected. Through these experiences, we become more mature and more open minded because we learn how to solve problems on our own. ISEP students Jetta and Hannah tell us a little bit about their experiences at the University of Ghana, what they fi