5 Ways I Have Found Convenience in Inconvenience Abroad

ISEP student Blue C. is a part of ISEP Voices Spring 2016. She is an exercise science major from Marshall University, and is currently studying abroad at the University of Chester in the United Kingdom.

Let me be frank. I have taken far too much advantage of the things readily available in the United States. I came from a country where waffles are available at all hours of the day and cookies can be delivered to your doorstep in the middle of the night. Suddenly I’m in a country where I can’t even go to the grocery store after 5 p.m. on Sunday. I grew up hearing, “If you want something, go get it.” I have spent the last four years of my life driving and taking full advantage of that saying with many trips to Walmart at three in the morning. Now I know that saying is meant to be all motivational and inspire you to “chase your dreams,” but it can be used in this context as well. I have become accustomed to being able to go anywhere I want with ease and get anything I may possibly need even at three in the morning. In England, if you want something, go get it, before 5 p.m. It is much different than life at home, but I have managed to find the convenience in everything I initially found so inconvenient.

1. I have become a health food connoisseur.

By health food, I mean less fast food. By less, I actually mean none. I have yet to step in a fast food establishment since being here. At home I usually stop in the drive through because I cannot possibly make myself something to eat before going to class or work. That would require waking up at least 15 minutes earlier and you know I can’t do that. Not only is there only one fast food restaurant anywhere near me (McDonald’s); it doesn’t even have a drive through. Here’s the kicker though, I don’t have a car!

2. I haven’t eaten at Waffle House.

I know what you’re thinking, “Blue, how on earth have you gone three weeks without Waffle House?” Okay really, you’re thinking that Waffle House is in the exact same category as previously stated, but you’re wrong. Waffle House deserves its own category entirely. I’m not saying I went there every day, but Waffle House had many great purposes: a stop for coworkers and I after getting off of work super late, a place for a 4 a.m. snack, and even breakfast on the rare occasion I was able to get there by an hour still considered “morning.” The fact of the matter is, it’s bad for me and thanks to the good ol’ United Kingdom, I have cut it out of my diet entirely.

3. I now have the body of a Greek Goddess. 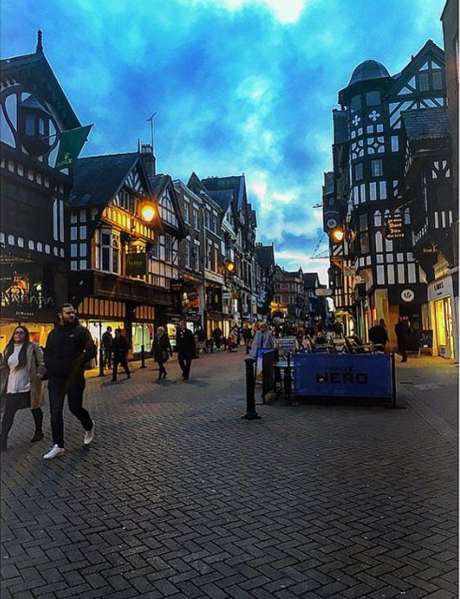 Town square at night in the UK.

Maybe not the entire body, but certainly my calves. England is very different in contrast to the U.S. because of its incredible network of public transportation. Cars are much more prominent in the United States. In England, I live in a building with around 60 students and not one of them has a car here. That’s a crazy difference when I come from a campus where you cannot even find a parking spot after 9 a.m. Instead of having a town with a little bit of everything within walking distance, in America there’s a little bit of everything within driving distance. I have now come accustomed to walking everywhere. I actually love it. I’m living in a beautiful town and exercising is not the worst thing that could happen to me.

Now, I actually have to plan these trips. Not only do I have to carry my groceries all the way back, but I have to make sure it’s enough food to keep me from going again for at least a solid three more days. Using my incredible intelligence and ingenuity I have crafted an idea that allows me to come home from the store with a sufficient amount of groceries. This is what I do… I make a list of the groceries I am going to buy. An unheard of idea among college students, but a brilliant one; these lists allow me to actually plan out what I am going to buy and then I come home with it. I have mastered the art of grocery store efficiency. 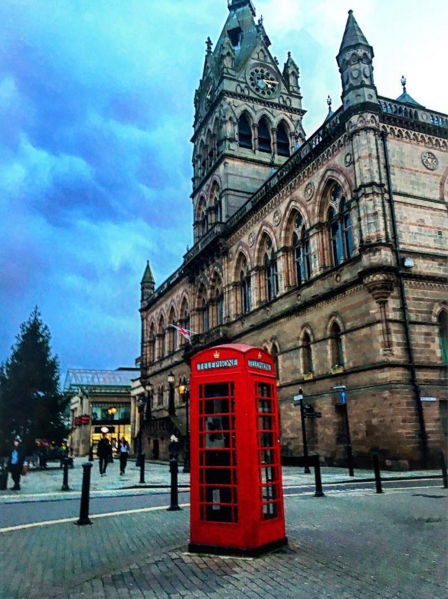 In my building I went a solid week just being known as “The American.” The thing is, there are about ten other Americans in my building, yet somehow I’m THE American. When I got here it was either sink or swim. I was inconvenienced by the fact that I started class in the middle of an academic year and everyone already knew one another. Not only that, but as far as British university students go, I certainly did not fit in. My name is Blue. I’m American. I’m new. I had no other option but to introduce myself, or spend an entire semester living in seclusion. The very first thing I did was walk downstairs and introduce myself to the first people I came across. I am very glad I did that. I still don’t “fit in” and that’s exactly what I love about it. I learn something new every day I spend with these new friends. It may be learning to look right instead of left for oncoming traffic, or that a flapjack is actually not a pancake, whatever it is, it’s a new experience. Shout out to John Milton Hall.

*Are you ready for your own adventure? See all of your study abroad options on the ISEP website.

Blog Getting Lost In Language While Studying Abroad As all college language students know, learning a language in the classroom does not come with DJ Khaled explaining the keys to success for language competency. Quite frankly, there are many components to just speaking and understanding any given language. Each language construction is unique and sp