Barbara is an ISEP Voices blogger. She is a graduate student studying international communication from Università degli Studi di Urbino “Carlo Bo” in Italy, and is currently studying abroad at Creighton University in Nebraska.

ISEP student Barbara D. is a part of ISEP Voices Spring 2016. She is a graduate student studying international communication from Università degli Studi di Urbino “Carlo Bo” in Italy, and is currently studying abroad at Creighton University in Nebraska.

I just came back from my spring break, and that means that more than half of this semester abroad is already over. It is making me realize how fast time goes, and anxiety is hitting me because I realize my experience is coming to an end. The positive aspect is that now I’ve seen many aspects of American culture. I’ve decided to stop for a while, look around, focus on the main differences between the United States and Italy and share them with you.

The first thing I noticed in America is that everything is huge! Roads, cars, houses, stores, food portions and more. The biggest difference for me was driving. I’m from a really small Italian town with its typical Roman features. Roman pavements, tight and winding streets, 50 km/h (31 mph) speed limit, two-lane highways, and the most common car is a 500 FIAT. In the U.S., roads are wide, straight and endless, the speed limit gets up to 70 mph, highways usually have six lines and the most common cars are SUVs and vans. But the biggest change is that traffic laws are almost unreal. People can pass you on both sides. While you are trying to understand which of the six lines you need to be in, how to change the gear (then you remember it is automatic) and looking for the blinkers in a car where also the gearshift is just on the steering wheel, you also have to look at both sides. Two eyes are not enough. I still have tachycardia from my last trip. There’s also the food sizes. You’ll see packages of cereal that would never fit in your home pantry, and snacks that don’t fit in your pocket.

At home in Italy, I can get in my car and start wandering around until I find an amazing place to stop and have a picnic with my boyfriend. I’ve done it by foot and by bicycle too, but not in the United States! I miss it now. I didn’t consider distances before I got here. I was driving from Las Vegas to the Grand Canyon, and for four and a half hours the only thing I saw was an endless desert — that’s Route 66. It’s like in the movies and I thought it was fiction, but it’s true. You’ll find a food station halfway and that’s it. Distances are huge. You can’t just wake up, realize it’s a beautiful day to go hiking, grab some food, get in your car and go. That’s why I must turn down most of the trips I wanted to do!

Another difference that I noticed involves mealtimes and schedules in general. In each country you go to, you’ll find a different culture; in each culture, you’ll find different habits. The most shocking thing for me was to get used to the mealtime schedule. Americans usually have breakfast around 9 a.m., then they have lunch at 11 a.m. or 12 p.m. So far, so good. But then they have dinner at 5 p.m., or 6 p.m. maximum. That means that after 8 p.m. everything is closed. Consequently, days seem so much shorter! I feel like I’m missing about four or five hours in my days! I don’t know why, but I can’t really reorganize my schedules. It’s hard to change your routine from one day to another and I think I still need some time to get used to the new routine. 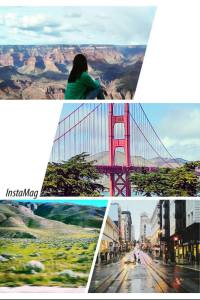 Some snapshots from my spring break!

When I told my friends that Americans are kind, they thought I making fun of them. We are used to the arrogant American characters we see in the movies. Americans are all but arrogant! Of course you’ll find some hotheads, but you won’t be surprised by that. You’ll be surprised by your peers standing at the door hold it open for you; by people who run after you because you drop your hair tie; by people who offer you help every time they see you, knowing you’re an exchange student and you may be confused or feel lonely; by professors who invite you out for lunch or to do some shopping, because they know you may not have friends to go out with during the weekends.

These are some of the main differences I’ve found in America. These differences are not a big deal, and eventually you’ll barely notice the differences. You’ll just follow the crowd. But when you have the time to stop and think about them, you’ll notice how your routine looks different now. That’s part of the experience! Once you’re back home, you’ll never be the same.

Blog 5 Ways to Live Like a Local on Study Abroad ISEP student Dantae H. is a part of ISEP Voices Spring 2016. She is a Spanish language and literature major from Roanoke College, and is currently studying abroad at Universidad Alfonso X el Sabio in Spain.

Barbara is an ISEP Voices blogger. She is a graduate student studying international communication from Università degli Studi di Urbino “Carlo Bo” in Italy, and is currently studying abroad at Creighton University in Nebraska.