How To Convince Your Parents To Study Abroad: Rachel's Story

You’ve decided you want to study abroad. Great! We’re excited for you (like, seriously). But what if your parents aren’t quite as pumped as you are? What if they say… no? Program Officer Rachel encountered some resistance from her parents when she wanted to study abroad in Ecuador. How did she convince her dad to let her go? Read on to learn her tips and tricks…

During my freshman year at The Ohio State University, I decided I wanted to study abroad in Quito, Ecuador. I was particularly drawn to the program due to the Spanish language learning element and the opportunity to live with a local family in a less popular study abroad destination. After visiting Costa Rica in high school, I knew I wanted to spend time in a Latin American country, and the only other Spanish language programs offered at OSU were in Spain. The program also offered numerous excursion and volunteer opportunities to establish a relationship with the local community.

However, at that time (2005-2006), Ecuador began experiencing the worst political and civil turmoil in nearly a century. Violence, protests, political instability, and civil unrest plagued the country. The events in Ecuador were covered throughout world news, which made convincing my parents that studying abroad Ecuador was a good idea quite challenging. My initial attempt resulted in my dad claiming he never wanted to hear the word “Ecuador” in future conversations; mail from my grandparents included newspaper cut outs and highlighted articles about the dangers in Ecuador. 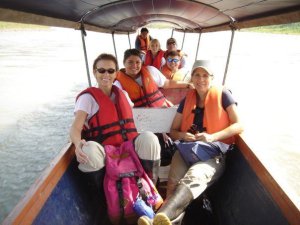 Rachel with her family in Ecuador.

My dad’s perspective only focused on the negative aspects of what was occurring in Ecuador at the current time, and was not taking the positive aspects or potential educational opportunities into account. I was not deterred; I creatively decided that if my dad didn’t want to hear the word “Ecuador,” he could watch a PowerPoint presentation and not have to hear a thing! I crafted a PowerPoint presentation highlighting the benefits of study abroad and the rich historical and cultural aspects of Ecuador. I knew I would eventually want to work with or in Latin America, and highlighted that I would be better be able to relate to people going through challenging circumstances if I could experience their struggles for myself. Therefore, I emphasized the competitive advantage I would gain if I had a demonstrated capability to adapt to challenging circumstances and live in a developing nation. The presentation also included OSAC Crime and Safety Reports of other countries where OSU offered programs to show that all countries had negative statistics, but with awareness, preparedness, and resources I could be a “smart traveler,” not a tourist. After seeing a broader perspective and being open minded to the advantages and potential opportunities Ecuador had to offer, my dad became supportive of my decision (with stipulations – a physical in case I got sick and needed to compare sick and health tests, of course – and readings on safety abroad). Not only did I end up studying abroad in Ecuador, I have returned several times (and even got my family to come visit!).

For students wishing to study abroad in non-traditional and places perceived as less safe, I would suggest thinking outside of the box when proposing the idea. Explain the benefits of the program and emphasize on the tools available to remain safe. Today students can enroll in the STEP (Smart Traveler Enrollment Program) through the Department of State, which sends updates on potentially unsafe events for the country in which you are registered. The STEP program has a Smart Traveler App available. Additionally, online resources allow parents and students to stay up-to-date on situations as they develop, such as the Bureau of Consular Affairs which publishes current travel warnings and alerts, as well as the WorldWide Caution. U.S. consulates in countries throughout the world now also have Facebook and Twitter pages that serve as additional resources for staying up to speed on safety concerns. If that still isn’t enough, the internet offers vast amounts of information for staying safe and being a “smart traveler” while abroad.

Thanks, Rachel! Do you have any tips for talking to parents about study abroad? Leave them in the comments!