Until my semester abroad, I hadn’t celebrated any serious holidays away from my family and friends — and then Easter rolled around.

Easter in Finland is celebrated a bit more widely than at my home university. The whole week leading up to Easter Sunday, the University of Jyvaskyla was closed and the dining halls had limited hours. My roommate was also off, so we had the whole week to hang out and prepare for Easter weekend. We decided we would do three separate events: a big brunch with our friends, a treasure hunt leading to chocolate Easter eggs, and a hike through a nearby forest looking for bunnies.

We wanted brunch to be Easter-themed so we bought the Finnish poster-child of Easter food, mämmi, a traditional dessert made of rye flour and water. It looks pretty nasty and tastes a bit weird, but if you add vanilla cream it’s something special. We each cooked a special meal from our home countries to make it an international Easter brunch. I made my world-class pancakes, but with a twist: I threw in cinnamon apple slices to make them more festive. My Hungarian roommate made ham stew with horseradish and cream that had my mouth watering for hours as he prepared it. Our German friends made a delicious tomato and bean stew to round out the meal. We ate and shared childhood Easter stories, which resulted in a little bit of homesickness because none of us had ever celebrated holidays so far from our families.

After the brunch, we started the treasure hunt my roommate made. It was a blast and the clues had us running up and down the dormitory like we were children again. Here are the clues in case you want to try it yourself. The answers are at the bottom of the post. 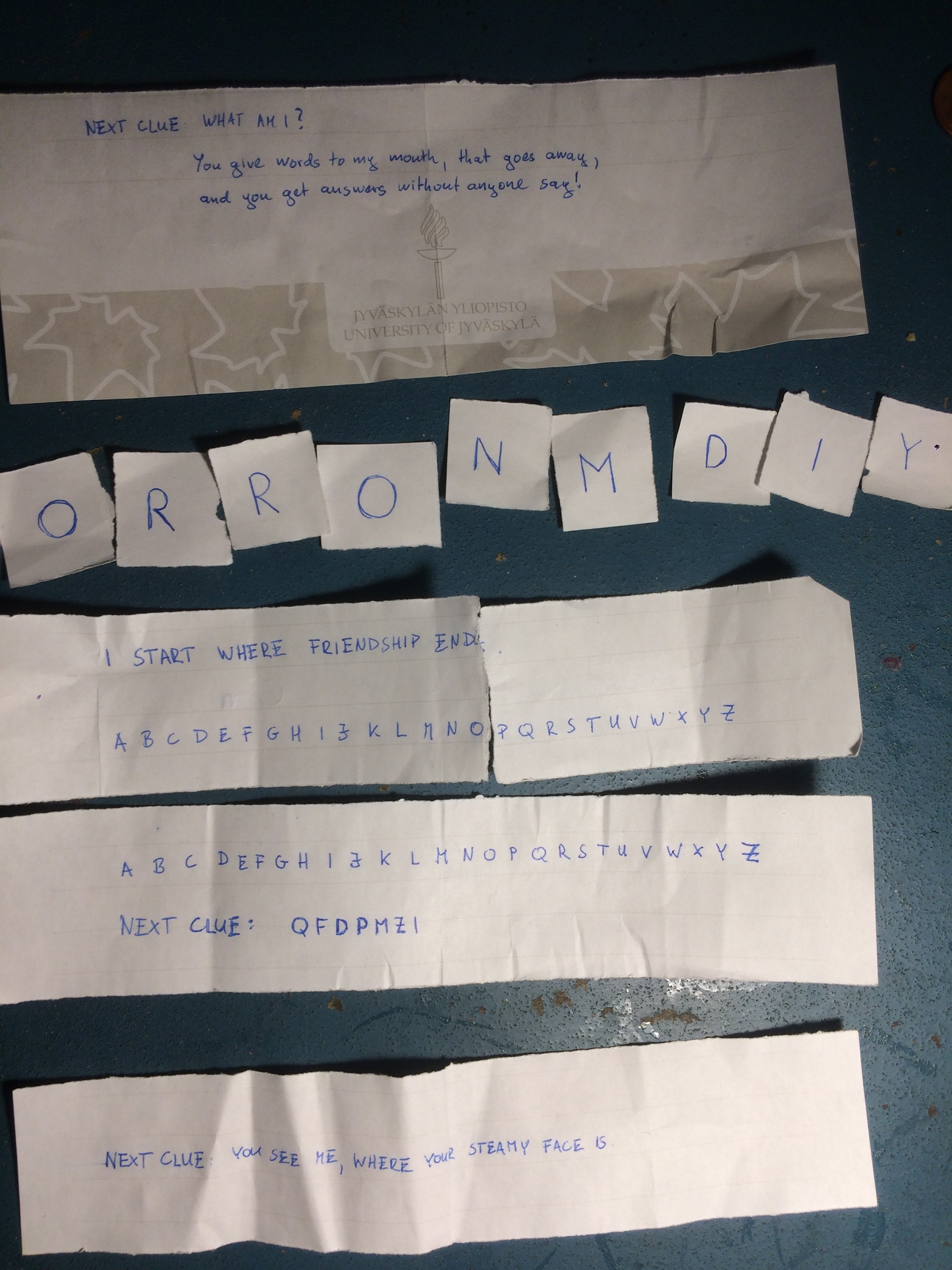 Treasure hunt answers are: mailbox, drying room, fuse box, and in our bathroom, if you made the room steamy, on the Mirror appeared the word ‘balcony’.

The final clue was actually quite hard. My roommate who made it is a bit of a mad scientist. We did end up solving it, and decided to take the chocolate eggs on the hike as a treat. It was a trail that we previously hiked in February when it was covered in snow and freezing, so we thought that it would be easier this time because it has since warmed up and the snow is gone. We were wrong. The snow had melted, but there were still long stretches of slick ice on the trail. Instead of just trudging through snow, we had to essentially ice skate through many sections of the trail. Most of us were ill-equipped and had shoes with no grips, thus we fell quite a bit. Although in Finland, falling is as frequent as coughing as there is ice everywhere.

We did manage to achieve our goal of seeing bunnies, and boy were we in for a surprise. The bunnies were massive, almost dog-sized. They were fast and ran in packs, and if they stood up on two feet they would be at my shoulders. It was daunting and amazing at the same time. We completed the hike and felt accomplished though definitely a bit sore. We finished the day snacking on some traditional mämmi. I wish I could have celebrated Easter with my family and friends from home, but the family I have here still made it a great weekend.

Blog Returning Home: It's Just a 'See Ya Later' They also say that home is wherever “I’m with you.” But if home is where heart is, then my heart is scattered across the world: a little town off the Ocoee River, the smoky hills of east Tennessee, the north Georgia mountains and the capital of the happiest country in the world.