How to Cook Like an Italian: 5 Tips I Learned While Studying Abroad

One of the many factors that drew me to the international study abroad program at Universitá Cattolica del Sacro Cuore in Milan, Italy was the cooking class they offer each semester. Who wouldn’t want to spend time every week learning about culinary traditions, cooking traditional food, and best of all, eating?

The actual cooking takes place once a week in one of Cattolica’s cafeteria kitchens, led by Chef Tito. Under his guidance, myself and the other students have moved through the courses of a traditional Italian meal, beginning with pasta and ending with dessert. An excellent chef and instructor, Chef Tito’s tips are too good not to share! 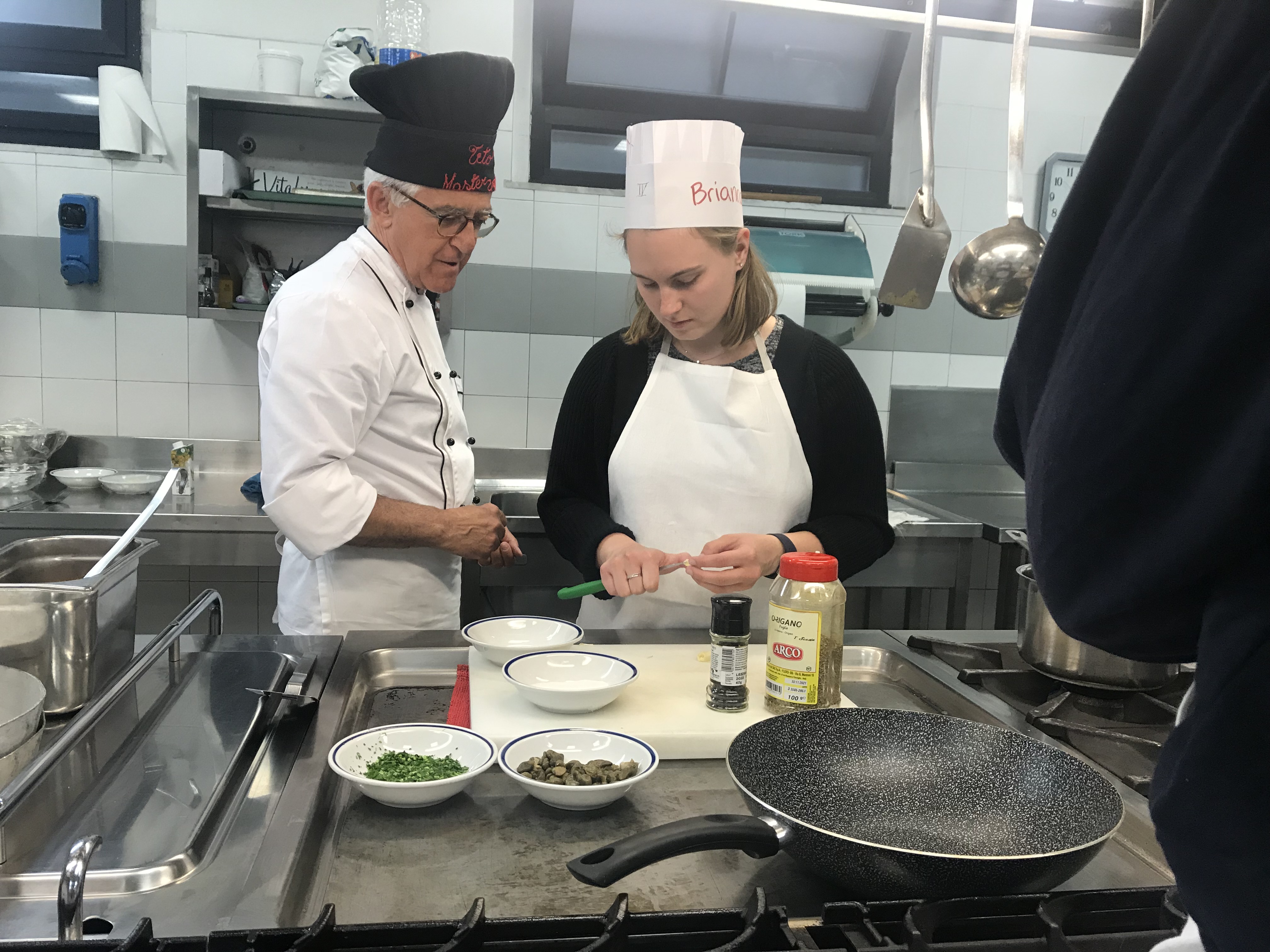 Preparing Garlic for Pasta with Garlic and Pepper

While Italian cuisine is famous for including garlic, traditional Italian cooking is very concerned with balance- you should never taste too much garlic! When cooking with garlic, cut the clove in half and remove the green shoot from the middle. According to Chef Tito, this part of the garlic is strongest tasting and should always be taken out. Italians call this part the “soul” of the garlic. 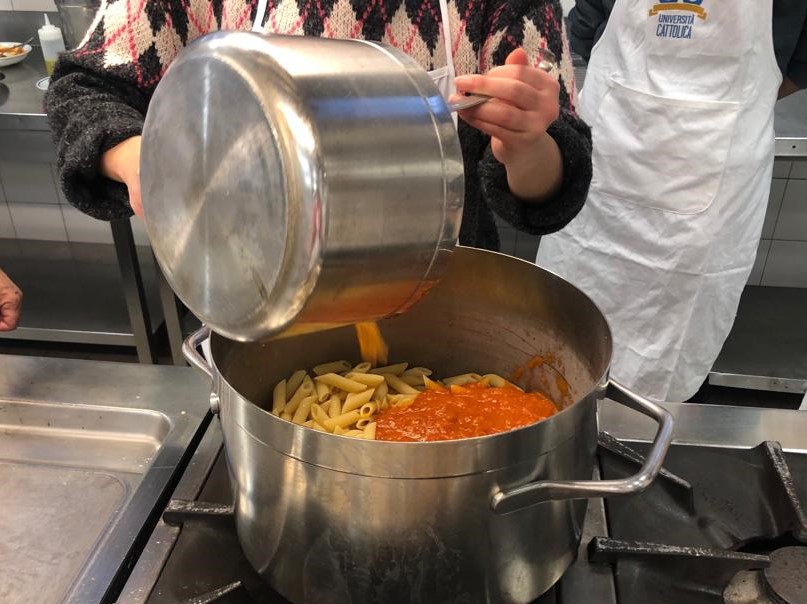 When preparing a pasta dish, always save around a cup of the water the pasta has been boiling in before draining. Often, once sauce and cheese have been added to a pasta, such as when you are preparing pesto, the dish can become dry. Just add a little pasta water to get a dish that’s creamy rather than dry. 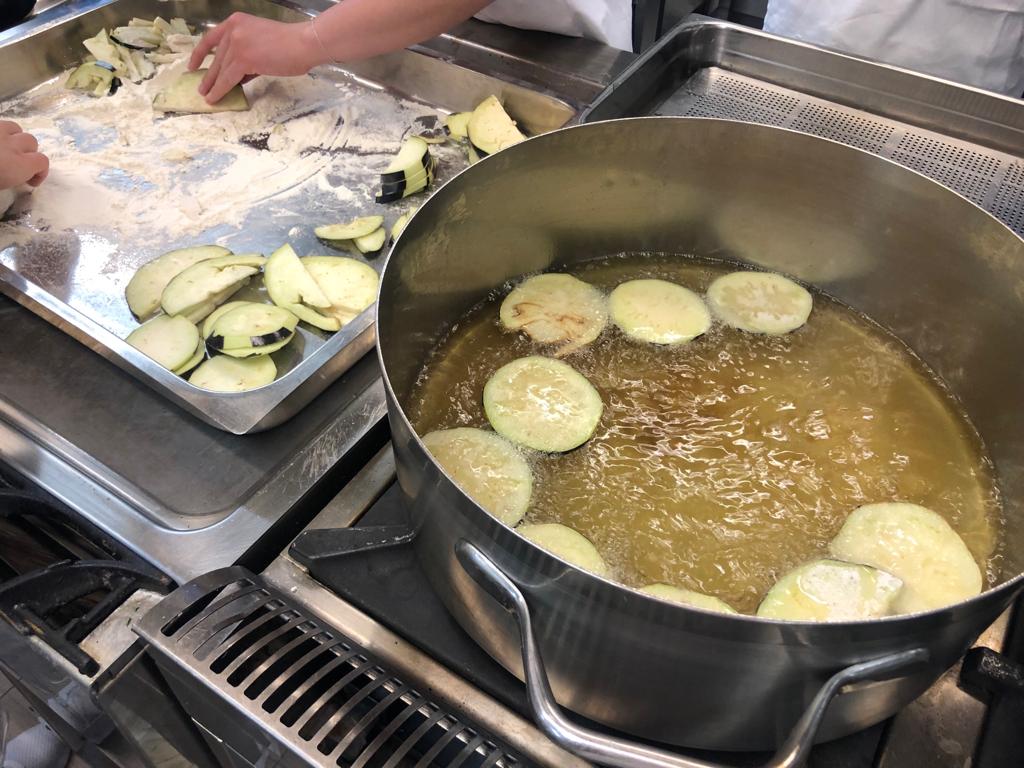 Chef Tito’s cooking class features a fair amount of frying, with varying amounts of breading and techniques from a shallow pan fry to a deep fry. No matter the recipe, always put salt on your food once it comes out of the oil so that you end up with a well-seasoned dish. 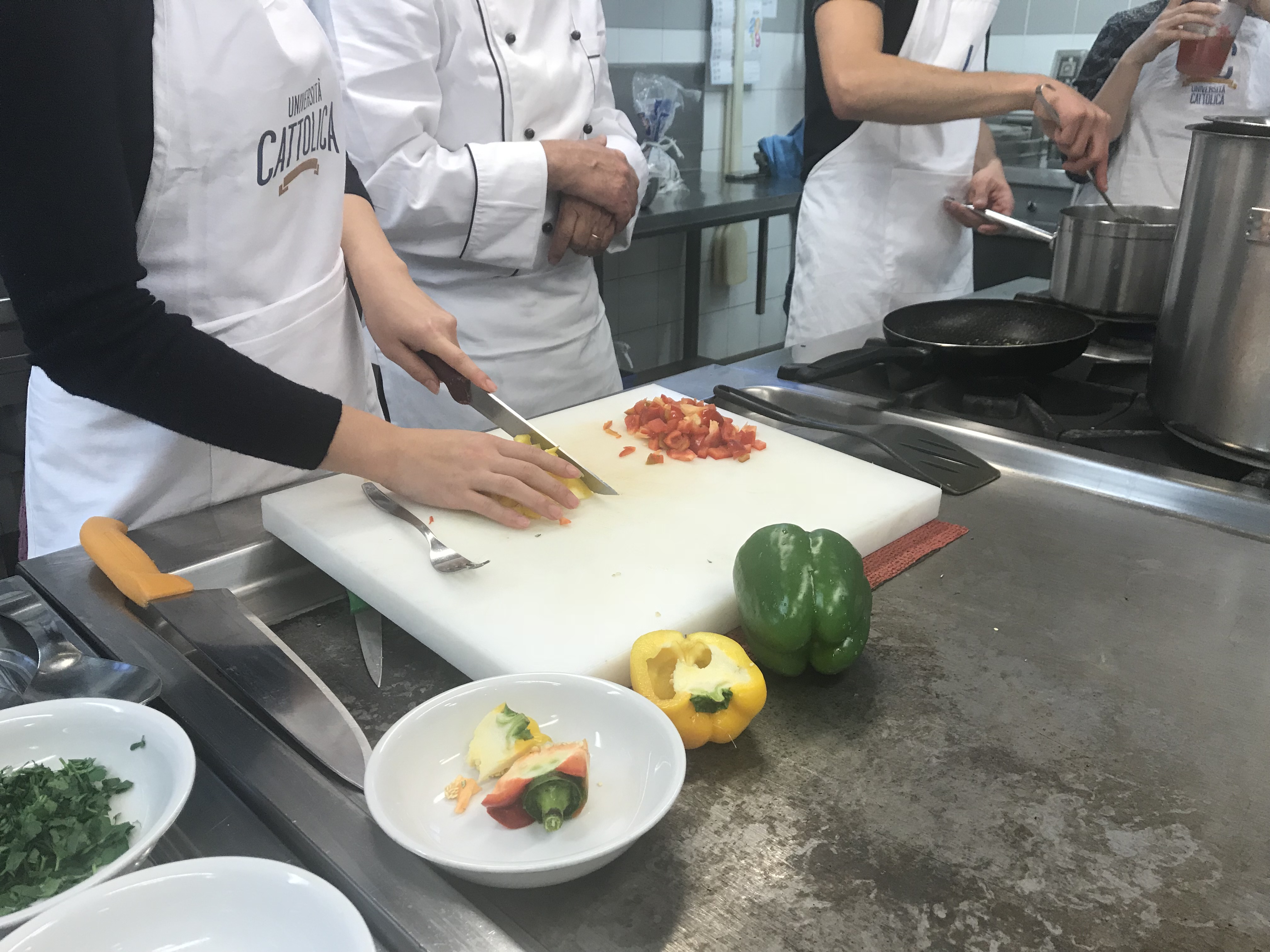 4. Cook fresh vegetables for a short amount of time.

One misconception I had coming into Chef Tito’s kitchen was that tomato sauce should always be cooked for a long time. This is not necessarily true- a sauce using fresh tomatoes should only cook for around 30 minutes. Cooking fresh tomatoes for a long time changes the flavor, at which point you could have been using canned tomatoes. For sauces that cook for a long time or use other strong flavors, Chef Tito recommends using canned while for dishes that feature the flavor of the tomato, a quick sauce using fresh is better. 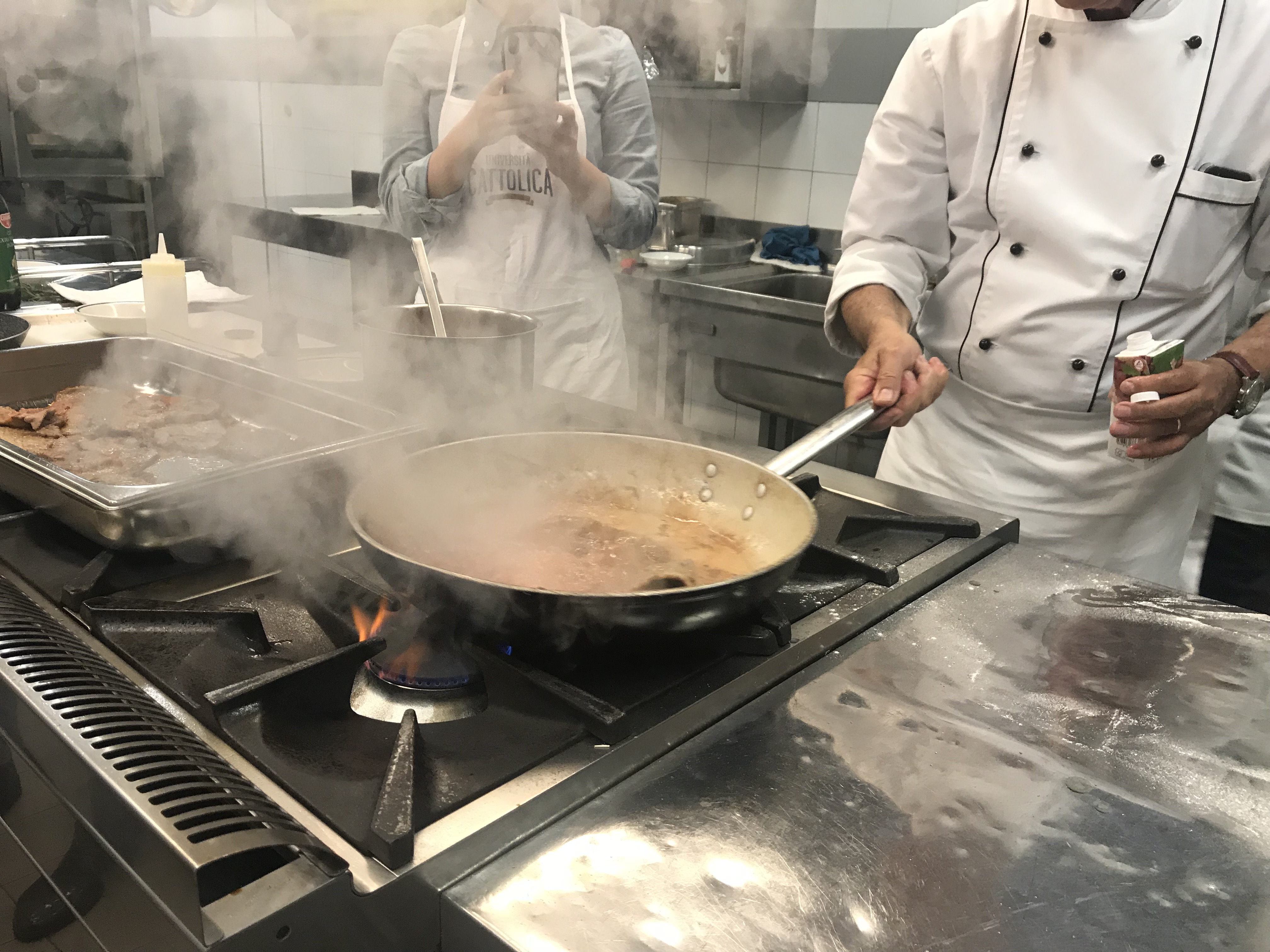 5. For an extra punch of flavor, deglaze your pan.

When cooking meat, make use of the residue left in the pan. After removing the meat, melt some butter and then add some wine. Cook for a few minutes, until all the alcohol has cooked out of the wine, then add to the rest of the sauce.

With these tips in mind, go forth and cook like a true Italian whether you’re in the United States, Colombia, Australia, or even Italy itself. You’ll be making Chef Tito proud! 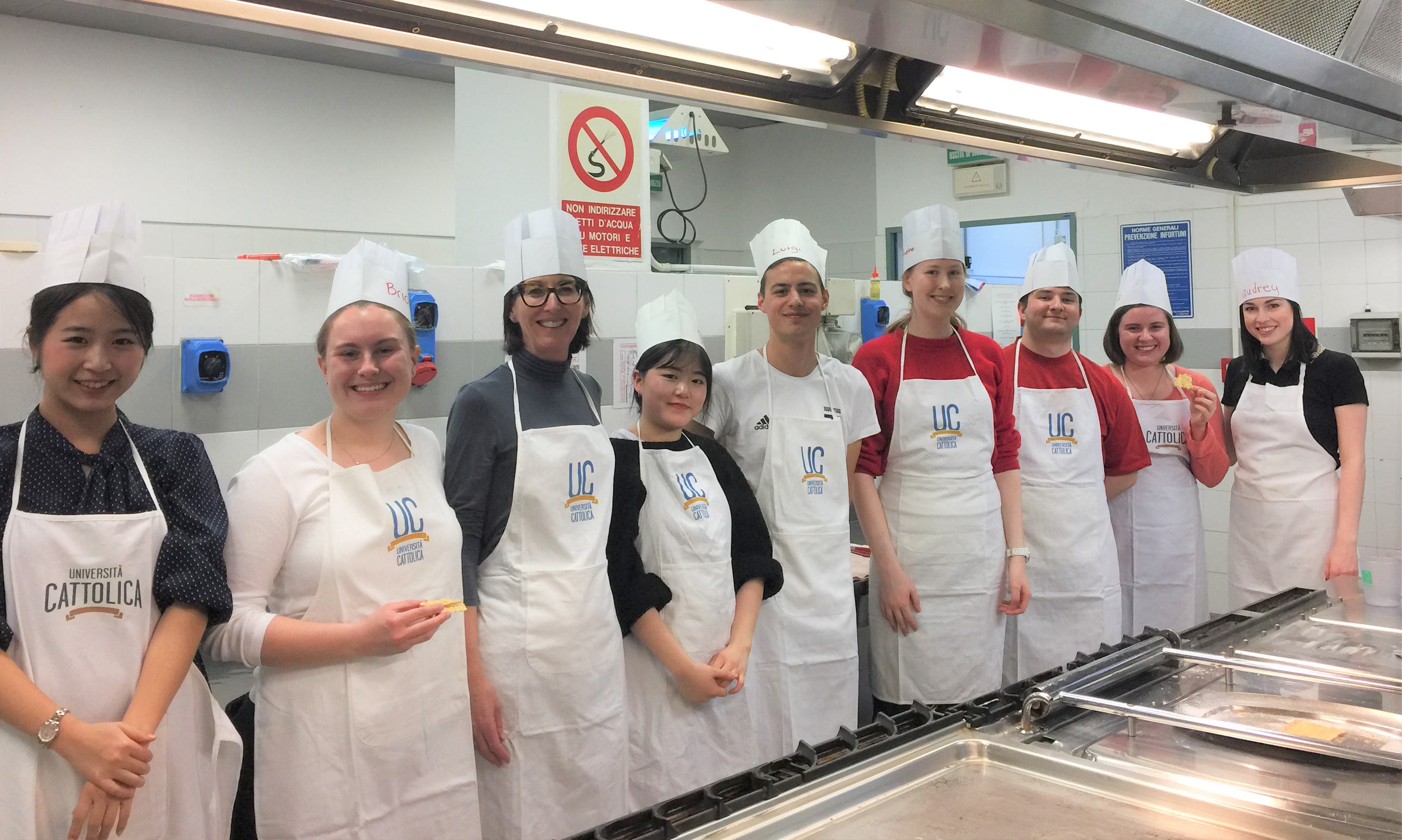