World Cup Fever has arrived at the ISEP Central Office, where national pride, country portfolios and linguistic loyalties are pitted against each other. Friendly rivalries between staff intensify with every round, and the main topic of conversation – after processing student applications, of course – is the next game. ISEP staff member Karlene M. shares her experience of delving into FIFA culture with her Spanish conversation group. 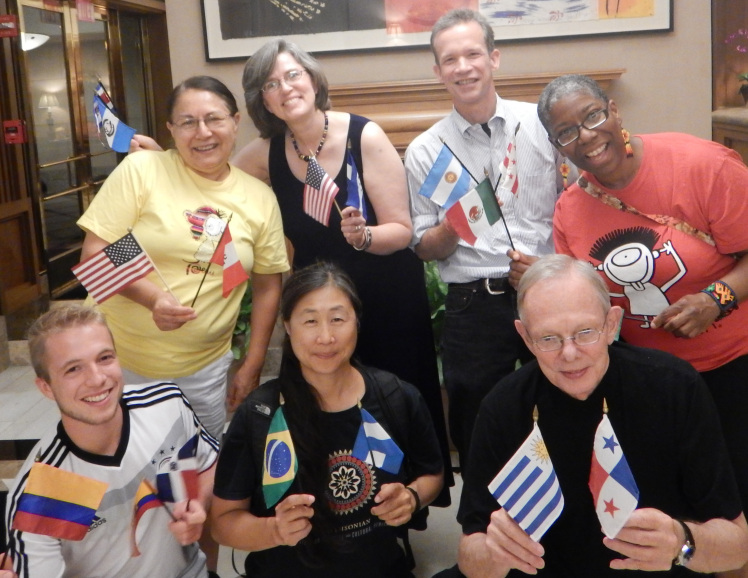 Everywhere I go, I overhear animated conversations about the 2014 World Cup games in Brazil. Even though I know very little about the sport, I can’t help but be caught up in the growing swell of enthusiasm for this championship series. However, my favorite conversations by far have been with my Monday night Spanish conversation group because we watched the second half of the USA-Ghana partido (game) on a Spanish-language channel. Here’s why:

The non-stop, rapid-fire commentary left me as breathless as watching the athletes themselves. And the eloquent, descriptive terms they used to describe basic actions intrigued me. I couldn’t help but feel a part of the mass of fútbolistas, cheering and groaning appropriately with every gol.

Both senses were challenged by listening and watching fútbol on the Spanish-language channel. Do we concentrate on the announcer’s use of language (the purpose of the conversation group) or the action on la cancha (field)? One amigo commented that during an earlier match, the announcer frequently repeated the word cuadrado. He wondered what ‘square’ had to do with fútbol when the camera panned to a jugador’s jersey bearing the surname Cuadado. Mystery solved! The German words Bundeslige and Mannschaft jumped out at me during a particularly long commentator discourse, but our limited understanding of the context (this was a game between the USA and Ghana, after all!) and no visual on the screen left us all in the dark … and questioning.

Her curiosity piqued, our Peruvian tutor found a scholarly article in Spanish about the terminology and language of fútbol. A text and a chart of 40 examples explained how and why fútbol words immigrated to Spanish. While English has the greatest influences on fútbol vocabulary, French, Italian, German and Quechua are also represented on the list, including:

Even more fascinating to me are the descriptive phrases that the sportscasters use. I now know that when a player hacer la bicicleta (moves his legs as if he is pedaling a bike), he is trying to distract an opposing player, and that every lamer el poste (lick of the goalpost) is cause for celebration or lamentation, depending upon one’s perspective. I still want to catch penar la pelota (to comb the ball, e.g. when the ball just brushes by a player’s head) in action as well as un gol olímpico (a goal scored when kicked from the corner) before it’s all over.

Who will be the 2014 champions? My conversation group debates this question each Monday night. I love being able to say the tongue twister ¡Ghana gana! ¡Ghana ganará! (Ghana wins! Ghana is going to win!), but since Ghana did not make it to the final 16, my time to enjoy this particular word play has ended. However, I will continue to add to my fútbol vocabulary for as long as the FIFA frenzy lasts and will be better prepared when this affliction returns in four years.

And I wonder: are ISEP students having similar experiences? Are they also learning new specialized vocabulary, knowledge and memories because of this quadrennial sporting event? I certainly hope so!

Blog ISEP Student Stories: Interacting With Locals in Ghana As a volunteer at an orphanage, Kasey learned how to adjust to unfamiliar social interactions in Ghana.