What I Didn't Expect When Coming to the U.S.

To tell the truth, I had a very precise idea of what my American college experience would be. I thought what I’ve seen in movies, series and books was the exact depiction of my soon-to-be experience. I wasn’t ready for the true college experience and it took me one semester to understand how it was actually working here. College experience is not just about going to class and getting an education. This is also about growing up as individuals and find who you are meant to be. 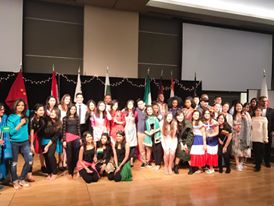 I thought I would come and immerse myself in the American culture, but here, you won’t learn only about the US culture, you’ll learn to become a global citizen. I wasn’t expecting that from my experience here, at least not that much. I knew I would feel more connected to another country such as the U.S., but I had no idea I would end up being aware of what happened all over the world and knowing about so many different cultures and traditions.I had the chance to meet international students from all over the world and I had the chance to have long talks with them. We were not afraid of asking the ‘stupid questions’ about each others’ country. We shared pictures and videos. We exchanged currency from our respective countries.

U.S.-American campuses promote different cultures. This semester, on Creighton’s campus, I’ve been able to learn more about Vietnamese traditions during the Lunar New Year; the Hawaiian culture during Hui ‘O Hawai’i; the Pakistani everyday’s of life when the comedian Danish Maqbool; the Sikh religion during a shared meal called Langar; and so many other events.

That is not something you really consider before going abroad. You just think that you are going to go to the specific country and you’ll try to live like a local, but being an international student is so much more. You are here as an ambassador of your country and you’re going to meet people from all over the world in the same position as you are. By talking with people, you’re going to end up traveling the world.

I’ve learned so many things in such a short period of time about so many different parts of the world and these amazing people just opened up my perspectives on places of the world I did not know anything about. I feel this year abroad completely changed my perception of the world and also the way I see myself in the world.

Blog About Me: The Journey I took to Self-discovery This blog post is all about the self journey or self discover that you go through when you’re six months abroad on the other side of the world and also just finished a book on self-understanding so bear with me.