Learn from our plenary and reception speakers.

Opening Reception at the Embassy of France

Lou Anna K. Simon, the 20th president of Michigan State University, leads the university’s work to advance the common good in Michigan and around the world. She began her career at MSU after earning her doctorate there in 1974. Prior to her appointment as president in 2005, Simon held a variety of administrative roles, including assistant provost for general academic administration, associate provost, and provost and vice president for academic affairs. As president, Simon has engaged MSU in a strategic and transformative journey to adapt the principles of the land-grant tradition to 21st-century challenges. She has expanded MSU’s reach in the state and around the world by focusing the university’s strengths on solutions that enhance and protect the quality of life: clean and affordable energy, access to education, safe and plentiful food and health care.

Dr. Fanta Aw is Interim Vice President of Campus Life at American University in Washington D.C. The mission of the Office of Campus Life is to integrate students into a diverse learning community; promote their intellectual, social and spiritual development; and, in collaboration with the faculty, prepare students for lifelong learning and global citizenship. Dr. Aw provides senior executive leadership for 13 departments in Campus Life. She has spent 25 years in higher education administration, most recently as Assistant Vice President of Campus Life. She advises American University leadership on matters related to campus internationalization, issues of inclusion, diversity and equity, and student engagement. Dr. Aw is also the School of International Service’s Hurst Professorial Lecturer; she teaches graduate courses related to immigration, internationalization of higher education, and international higher education policy. She is the 2013 recipient of the University Award for Outstanding Teaching in an Adjunct Position.

Dr. Aw is past President and Chair of the Board of Directors of NAFSA: Association of International Educators, the largest membership association of international educators with close to 10,000 members. She has chaired the board of ETS TOEFL. Currently she is on the board of Cultural Vista, as well as the Advisory Council for the Center for Education Diplomacy. Dr. Aw is a frequent keynote speaker on topics related to U.S. immigration, international educational exchanges, and diversity and inclusion in higher education. She has been interviewed by major global media outlets including CNN, Agence France Press, USA Today, Washington Post, The Chronicle of Higher Education, National Public Radio, Middle East Broadcast Corporation, Washington Business Journal, WAMU, Radio France International, Washington Diplomat and China Daily.

In 2013, Gray-Little was named to the board of directors of the Association of American Universities (AAU) and of the Association of Public and Land-grant Universities (APLU), which she chaired from 2015 to 2016. She has served as vice chair of the board of trustees for the Online Computer Library Center, an international organization dedicated to expanding public access to information and research. At present she serves on the board of the Digital Preservation Network (DPN), which seeks to develop reliable preservation for universities’ digital archives.

Prior to becoming chancellor, Dr. Gray-Little held leadership positions at the University of North Carolina-Chapel Hill, including executive vice chancellor and provost (2006-2009), dean of arts and sciences (2004-2006), and executive associate provost (2001-2004). She was a faculty member in the Department of Psychology, and served as department chair.

Gray-Little earned her B. A. from Marywood College and M. S. and Ph.D. degrees from Saint Louis University. She was a Fulbright Fellow, a Social Science Research Council Fellow, and received a Ford Foundation Senior Scholar Fellowship through the National Research Council.

Professor Nolan became Principal and Vice-Chancellor of Edinburgh Napier University in July 2013. Her institutional leadership career began with the appointment as Head of Division of Veterinary Pharmacology at the University of Glasgow, becoming Dean of the Faculty of Veterinary Medicine in 1999 and thereafter, Vice Principal for Learning & Teaching and Senior Vice-Principal & Deputy Vice Chancellor in 2009. Professor Nolan graduated as a veterinary surgeon from Trinity College Dublin and after a short time in veterinary practice, embarked on an academic career which took her to the Universities of Cambridge, Bristol and the Technical University of Munich. During the 1990s, she established herself as a research leader in the field of animal pain, and was appointed Professor of Veterinary Pharmacology in 1998.

Professor Nolan is currently the Convenor of Universities Scotland and she is a board member of the Higher Education Statistics Agency, Universities UK, Universities and Colleges Employers Association, Royal Zoological Society Scotland Board, Interface Advisory Board and the Moredun Foundation. Professor Nolan is also a Trustee for the Medical Research Scotland – Scottish Hospital Endowment Research Trust, two animal welfare charities and a Council member for the Edinburgh Chamber of Commerce Council. She is a Fellow of the Royal Society of Edinburgh, a Fellow of the Royal Agricultural Societies and an honorary life member of the Association for Veterinary Teachers & Research Workers. Professor Nolan was awarded an honorary Order of the British Empire in 2014.

President and Vice-Chancellor, University of Regina
ISEP Board of Directors Member

Since becoming President and Vice-Chancellor of the University of Regina in 2008, Dr. Vianne Timmons has promoted international educational opportunities for students. Consequently, international enrolments at her home institution have grown by more than 100%, and now comprise close to 14% of the institution’s 14,300 students. In addition, more than 200 domestic University of Regina students have study abroad experiences each year. Dr. Timmons has served as Chair of the Canadian Bureau for International Education, and was honored by the organization in 2015 with its President’s Award for Distinguished Leadership in International Education. She has been an ISEP board member since 2016.

Raja Bhattar is a nationally-recognized social justice educator and approaches this work through an intersectional perspective towards LGBTQ advocacy, racial justice and social equity. They have been critical in developing and implementing policies and strategies leading to UCLA’s consistent ranking as top-LGBTQ friendly campus during their time as director of the LGBT Campus Resource Center.

Since 1995, Candice has served as a key advocate for issues of importance to the LGBTQ community. Their involvement in the movement for queer equality began when their brother, Rep. Newt Gingrich, R-Ga., was elected as House speaker for the United States Congress. Their 1996 autobiography, “The Accidental Activist,” was a best seller in the LGBTQ community.

Sanford Ungar has served as president of Goucher College, director of the Voice of America, dean of the School of Communication at American University and a co-host of “All Things Considered” on NPR.

Director of the Institute for the Study of Diplomacy for the School of Foreign Service, Georgetown University

Ambassador Bodine is a distinguished professor in the practice of diplomacy. A former member of the U.S. Foreign Service, Bodine served in leadership positions in Iraq, twice, Kuwait, and as Ambassador to Yemen.

Nirmal Ghosh is U.S. Bureau Chief of Singapore’s and South East Asia’s #1 English newspaper. He has been a foreign correspondent in Manila, New Delhi and Bangkok covering politics, elections, conflict, natural disasters, and social and environmental issues across Asia.

Ambassador McHenry served as U.S. Ambassador and permanent representative to the United Nations, and as a member of the Cabinet of President Jimmy Carter.

Dr. Dan Davidson is Senior Academic Advisor and President Emeritus of American Councils for International Education and Professor of Russian and Second Language Acquisition, Bryn Mawr College. He is author and editor of 44 books and 65 scholarly articles on Russian language, culture and study abroad immersion learning.

Elizabeth joined the British Council in 2006 as part of the United Kingdom education research team. In 2010, she was posted to Washington D.C., where she managed U.K. – U.S. Higher Education policy dialogues and multi-lateral partnership grant funding. She was then posted to Hong Kong where she led the global education research team, and now works as Senior Researcher based in London. Elizabeth is studying for a Ph.D. at the University of London.

John comes to ISEP with two decades of experience in higher education and student mobility. He has served as provost of the School for International Training and associate vice president of IES Abroad. John also spent 12 years working in Spain, directing international programs for IES, CIEE and the Institute for Social and International Studies at Portland State University. He has extensive experience working with partner universities and sees partnership as the path to increased student mobility. John has published on language and intercultural communication and is an active member of several international education associations and cultural societies. He currently serves on the board of the Forum on Education Abroad. John holds a Ph.D. and master’s degree in Spanish from Penn State University and a master’s degree in international education from SIT. When not on the road for ISEP, John enjoys hiking and biking. He considers himself an avid foodie and enjoys trying new international cuisines. He speaks Spanish, French, Catalan fluently, and he has studied German and Italian as well. John also serves as ISEP’s Council of Advisor’s Ex-Officio Member.

Closing Reception at the Organization of American States

Chartered buses will be provided to the closing reception. ISEP staff will provide additional directions at designated times. Please bring a photo ID to present for admission. 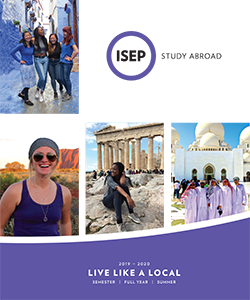 Download our catalog.
Our site uses cookies - some are essential to make the site work; others help us improve the user experience. By using the site, you agree to the use of these cookies. To learn more, please read our privacy statement.